While sketching in a piazza in Germany, Bonnie was approached by artist, Rudolf Schmid. This prominent Bavarian Glass 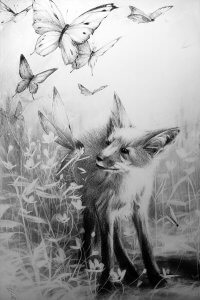 painter showed an interest in Bews’ style of work and offered her an apprenticeship at his studio www.glaeserne-scheune.de  Bonnie accepted this unique opportunity and returned to Germany in 1992 to discover a whole new medium including Hinterglas.

Hinterglas or reverse glass painting is a traditional European technique in which the artist paints on the reverse side of the glass. The earliest examples of Hinterglas (cold painting) are from the time of Constantine, 3rd century. In the 13th and 14th century (Italy and Germany) the primary use of Hinterglas was to decorate furniture. By the 16th century hinterglas gained popularity for its use of brilliant colours and intricate designs. In the 18th and 19th century, great demands for reverse glass painting opened many small businesses within the European community. The industry continued to thrive throughout Europe until the end of the 19th century when its demand was replaced by colour lithography and photography. Artist Bonnie Bews uses a method that allows the application of graphite and watercolour to the glass (developed by Rudolf 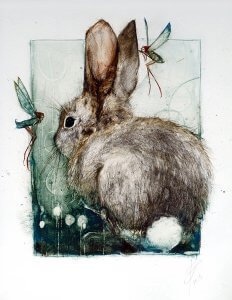 Schmid/Germany). Her soft whimsical touch allows her to create paintings with delicate lines and translucent colours. The placement of a white backing or a second piece of glass against the image completes the process.

Check out her Facebook page for current happenings
www.Hinterglas-facebook