For moving quickly to serve business in new ways, the Muskoka Lakes Chamber of Commerce has been recognized with an Ontario-wide “Power of the Pivot Award”. The Muskoka Lakes Chamber was selected from more than 135 boards of trades and chambers across Ontario for the honour, which recognizes “exceptional value delivered by chambers directly related to the pandemic response.”

Executive Director Norah Fountain with the Power of the Pivot Award

Presented virtually by the Ontario Chamber of Commerce at its annual convention on May 4, the glass plaque that’s shaped like the province of Ontario arrived at the Muskoka Lakes Chamber office on May 18.

“I’ve been attending these awards for years,” says Norah Fountain, the Chamber’s Executive Director, “and I don’t recall recognition like this going to a smaller chamber before. I was floored when they announced us.”

Fountain and the Chamber became a pivotal point of contact for businesses during the pandemic. The Chamber shared valuable resources about COVID-19 guidelines, funding opportunities, and helped businesses apply for support. Just days after the first Ontario lockdown, the Chamber had COVID-19 resources on their website.

Their biggest pivotal action, however, was to change the way governments were thinking about support for businesses reeling from sudden lockdown.

The Spring 2019 floods had devastated businesses in Muskoka, which resulted in decreased revenues for those businesses affected. This decreased revenue from Spring 2019 could have made many businesses ineligible for government support in the spring of 2020, but Fountain and the Chamber worked hard to make three levels of government — municipal, District, and Federal – understand that Muskoka’s situation needed to be looked at differently. Working with David Brushey of Muskoka Futures, and with support of neighboring Chambers, they were able to obtain a $750 thousand commitment from the District of Muskoka, and $1.2 million from the Federal government.

That was just the start. The Muskoka Emergency Response Fund grew to $5.5 million under Brushey’s guidance.

As Fountain points out, the Muskoka Lakes Chamber was never alone in its efforts. The Bracebridge Chamber of Commerce jumped on board immediately to support the fund idea. Other chambers followed suit, and it became a team effort. Together, they propelled the idea forward that a District-wide Muskoka Emergency Response Task Force needed to be formed.

“On accepting this award,” says Fountain, “I said I could only accept it on behalf of all our Chambers and partners. We all pivoted. We’re all working so hard and collaboratively, together, to help our local businesses and non-profits get through this. And there’s still so much to be done.”

Fountain adds the Chamber would not be able to tackle all it does without the energy and support of the Chamber’s Business Development and Communications Manager, Katelyn Broad.

“It’s the one-on-one support that Katelyn and I have delivered that I think has mattered most to our Chamber Members,” says Fountain. For example, the Chamber has always been committed to advancing their members’ digital literacy. During the pandemic it ran workshops, such as “Beyond the Likes”, a social media workshop to help businesses stay connected with their customers. It promoted grants and programs to move businesses online. Often, that meant walking a business through an application process one-on-one, showing them how to upload products on to online shop sites, and teaching them video conference techniques.

“We even had an early Zoom bomb experience while our Muskoka Lakes Mayor Phil Harding was speaking,” Fountain says. “It was awful, but we all learned a lot about digital security that day.” 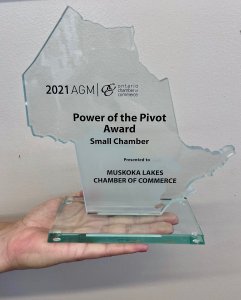 The Chamber is also dedicated to protecting the community’s morale. In the past year, the Chamber team has moderated panels, held Virtual Trivia Wednesdays, organized a virtual Santa Parade, and even started SantaVisits.ca so families could still get their annual visit and picture with Santa.

“I didn’t know if it would work,” says Fountain about the virtual Santa visits that she moderated dressed up as an elf. “But children were so excited to have Santa come right into their living rooms!”

The Muskoka Lakes Chamber shared the “Power of the Pivot” honours with the chambers of Kitchener-Waterloo and Cambridge, who together won the Large Chamber award for their Rapid COVID Testing Pilot, a program now rolling out by four chambers in Muskoka. Through RapidTestMuskoka.com, businesses can get free rapid tests to screen their employees to ward off workplace breakouts.

The Muskoka Lakes Chamber reveals yet another innovation at the Parry Sound-Muskoka IMPACT Awards on May 27, and Fountain hopes many will tune in to see a new team effort supported by the Township of Muskoka Lakes, FedNor, Parry Sound Muskoka Community Network (PMCN), Magnet, and Lakeland Networks.

About the Author: Natalie MacMillan

Hi, I’m Natalie MacMillan! I’ve been working for the Muskoka Lakes Chamber for about a month as a Brand Ambassador and Content Writer. Born and raised in Toronto, Muskoka has always been a huge part of who I am. My grandfather grew up coming to Bala Bay every summer growing up, as did my mom, as did I! A decade ago we moved from Bala to East Bay, where we now spend our summers. Being here in Muskoka during the summer is home to me, and I can’t wait to pass my devotion to Muskoka down to future generations. I have so enjoyed bringing the stories of your small businesses to life, and seeing all the unique stories we have in our community. Just this spring I graduated from the University of King’s College in Halifax with a Bachelor’s Degree of Journalism (Honours). I am eager to continue working with the Chamber as I develop more of my writing and communication skills.