They’re back! Jack Hutton & Friends will be playing at the Gravenhurst Opera House this summer after a one year hiatus!

Following in the footsteps of the Rolling Stones, they’re calling this their ‘Farewell Tour’ and they’re looking forward to bringing us the most memorable moments of their shows of the past. The group’s very first Gravenhurst performance on July 26, 2003, may have set an attendance record, filling every seat. The tribute to Walter Donaldson got standing ovations for tunes like ‘Yes Sir, That’s My Baby‘, which they’ve included in this program.

Don’t miss hearing trombone virtuoso Bob Livingston, who toured with the Glenn Miller Orchestra in his teens. Bob, who is currently busy performing and writing arrangements with a sextet, sounds like Tommy Dorsey with ‘I’ll Never Smile Again’ and ‘Getting Sentimental Over You’. Brian Bauer, who mixes the world’s worst jokes with his unmatched mastery of vaudeville saxophone, will show us why he is one of the world’s best. Will Wilson from Niagara-on-the-Lake, will demonstrate why he is one of the few banjo players who has performed with a symphony orchestra. Ric Giorgi, who has led three symphony orchestras in the Toronto area, will again anchor the evening on string bass and perhaps bass saxophone. Band leader, Jack Hutton, who sounds like a mixture of Fats Waller and a ragtime Chopin, will be presiding on the 9-foot Steinway grand. 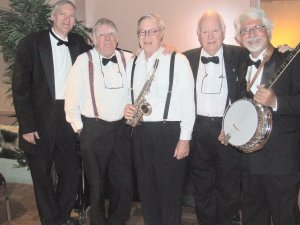