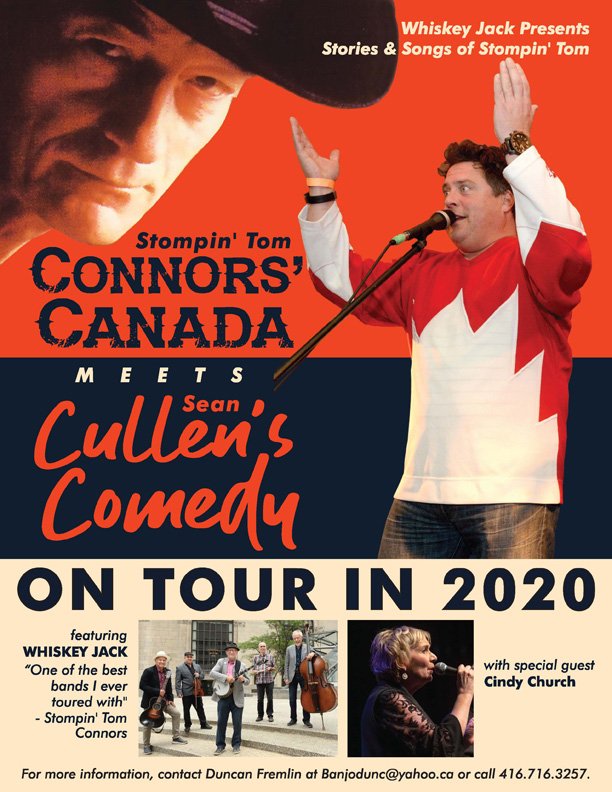 “Stompin’ Tom’s Canada Meets Sean Cullen’s Comedy” is a playful, funny, very musical and all
Canadian show starring one of Stompin’ Tom’s favourite touring bands, Whiskey Jack. Sean
and the band have presented their onstage antics numerous times over the years and will be on
tour again in 2020.

Duncan Fremlin and his show “Whiskey Jack Presents Stories & Songs of Stompin’ Tom” first
invited comedian, author, actor and singer Sean Cullen to join them at their very first concert in
2014. As Sean stepped onto the stage that night, he told the audience that Tom had written
songs about potatoes, tomatoes and tobacco but sadly, not one about what many consider to
be Canada’s national food, poutine. Within minutes and with the band providing the soundtrack,
I Love Poutine was created, on stage, in front of hundreds of hungry fans. It brought the house
down!

Whiskey Jack’s 25 years on stage and in the studio with Stompin’ Tom form the heart and soul
of this show, now in its 7th year. Each night, Duncan and his all star musicians, including 5 time
Canadian National Fiddle Champion, Randy Morrison and 2 time Juno nominee, Douglas John
Cameron, captivate the fans by singing all the hits (The Hockey Song, Bud the Spud and more)
and sharing stories of the private, backstage world of Stompin’ Tom. And yes, these are the
outrageous tales that made him the legendary iconic hero to the entire country.